TIME FOR BARRELS AT BEL OMBRE!

Tune into the liveticker for the finals here!

After an enthralling day of Freestyle final action on Monday, we switched back to the continuation of the Kite-Surf discipline, with the men’s single elimination out on the reef behind the Heritage Lagoon in Bel Ombre. 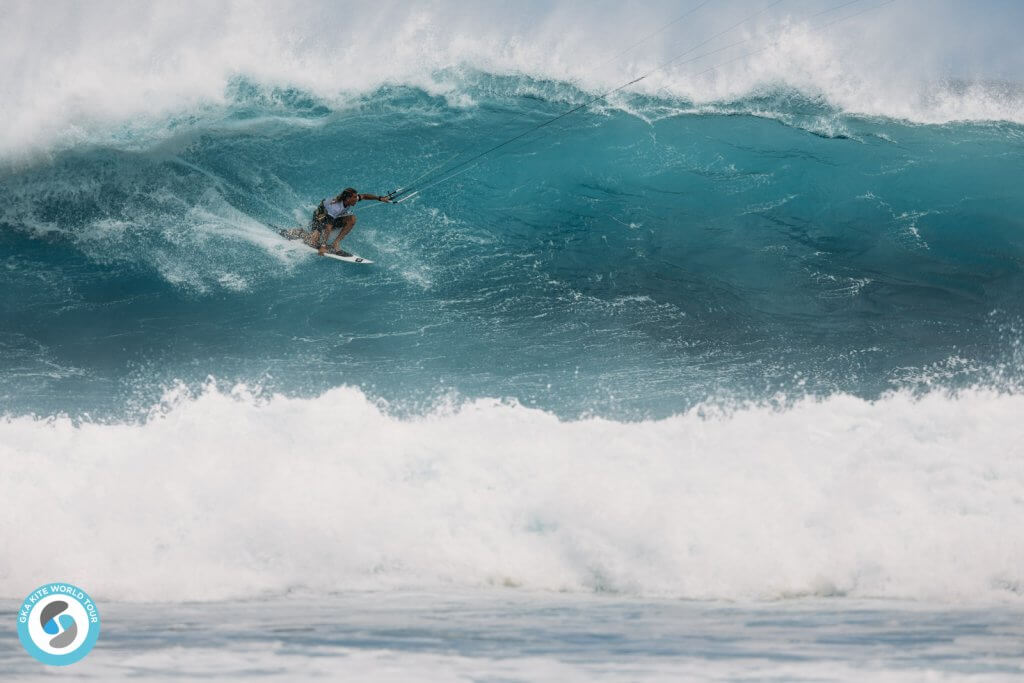 There were some really big waves coming through, challenging the reef to hold up the faces as long as possible. It took a while for most riders to build their confidence through the 20 minute heats in these shallow waters, working their way up and down the big marauding faces. 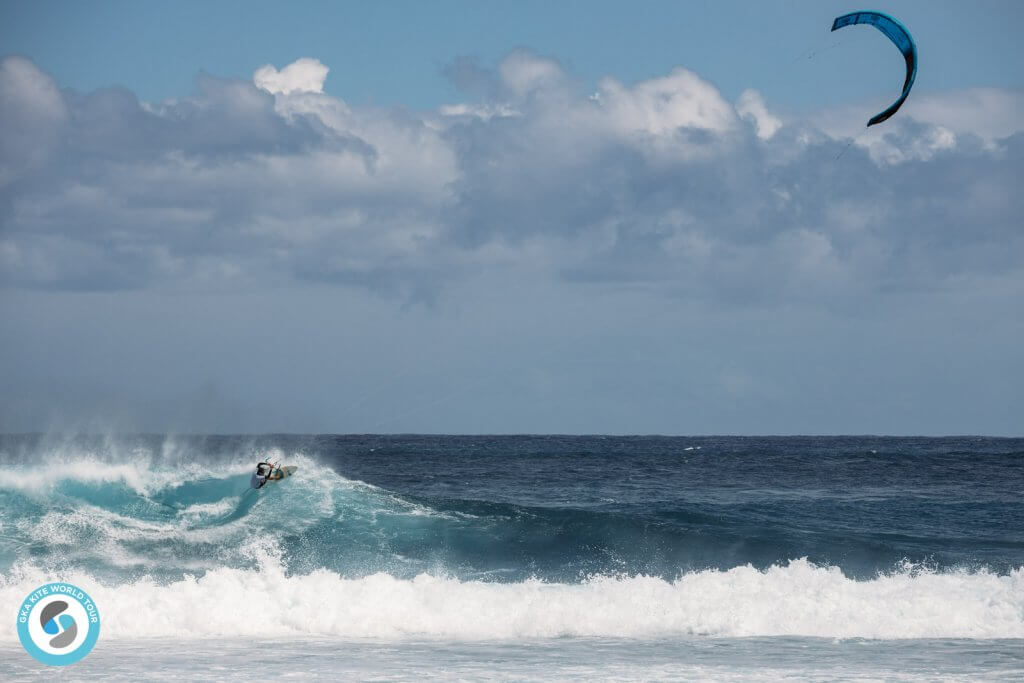 Francesco Capuzzo won his first heat this morning and was the first rider to update us on how the conditions really felt:

“The wind is shifting a bit, but okay and the waves are quite big, though closing out occasionally. If you pick the right one it’s fun because they’re between two and three metres on the face.”

The waves continued to beat in, holding form and size before becoming playable, steeper and quicker for the final 40 metre sections. The predictability of the foam, breaking left to right as we looked at it seemed consistent – but for the riders it was difficult to manage the moment to either start linking turns, or delay until the time to pull the pin, take a high line and try to thread the barrel.

Jeremy Chan, a local rider, infamous for having knocked Airton Cozzolino out of the competition in 2017, once again used his local knowledge to show the judges how to really work a wave all the way to the inside 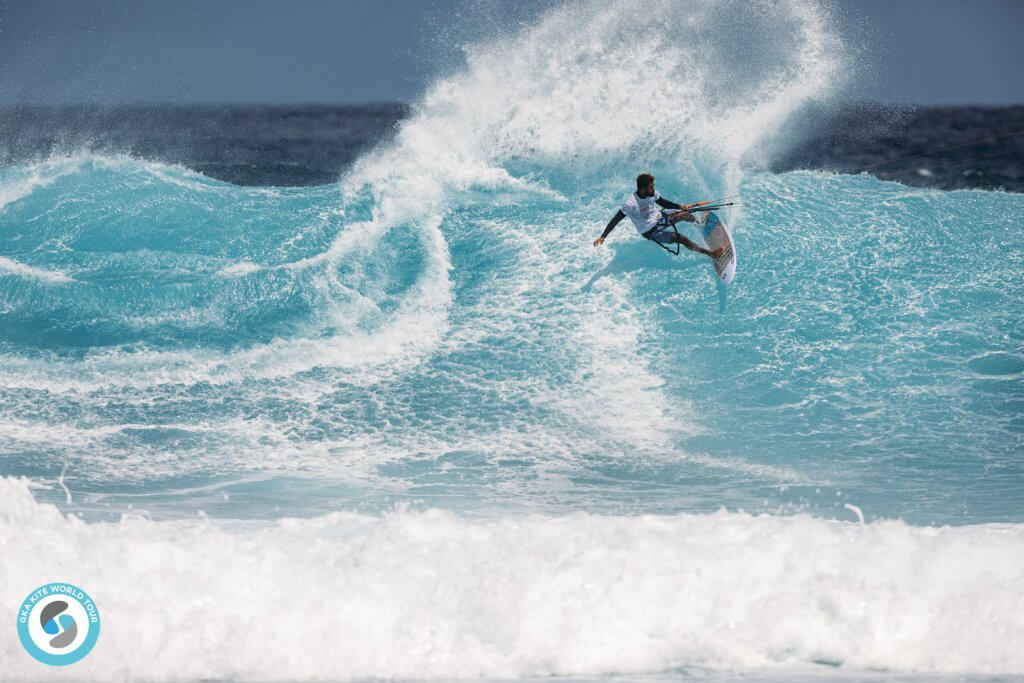 When Airton Cozzolino entered the competition in heat 8A, suddenly the waves looked different; somehow more approachable and easier to read. They weren’t, but judge Torrin Bright commented to me that his extreme mastery to maintain line tension wherever he is on the wave, whether punching the lip and dropping back in from three metres up, or gouging the hell out of a bottom turn, is testament to just how many hours that man spends on the water in his life. It’s more than anyone I’ve seen. 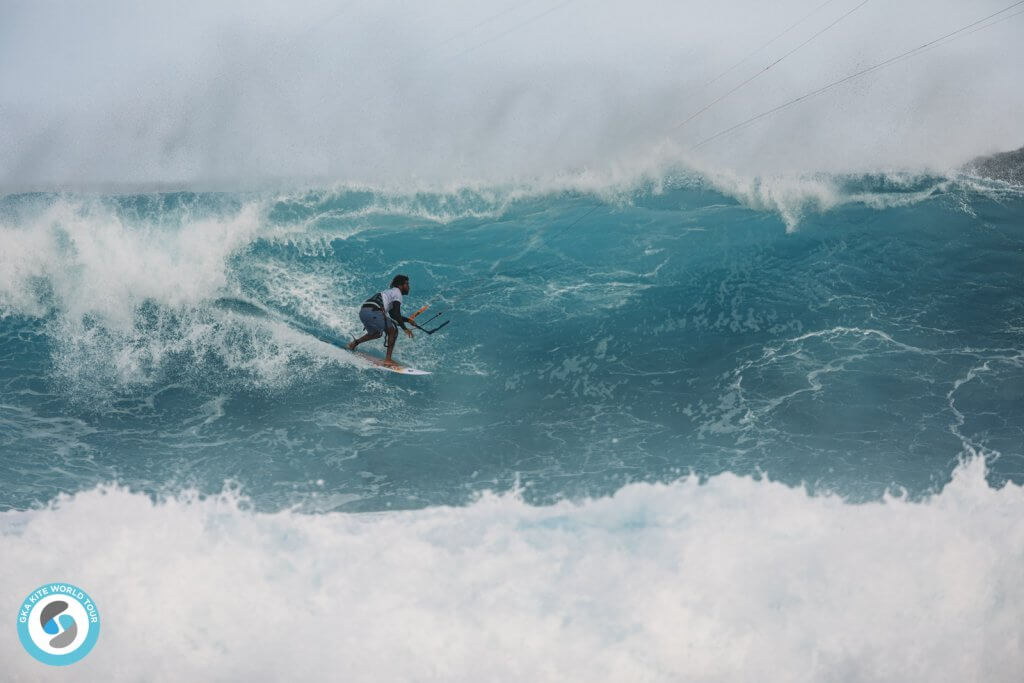 Ready to thread the needle

He was the first rider to go full throttle for a barrel, getting covered up for at least 15 metres; sadly not coming out, but his lines sliced the cascading lip sharply for several seconds and drew whoops from the judging tower. Aggression, high wave count and an extremely varied wave attack; his opponent Bart Labonne is a solid rider, and must have rued drawing Airton first round. Who doesn’t? 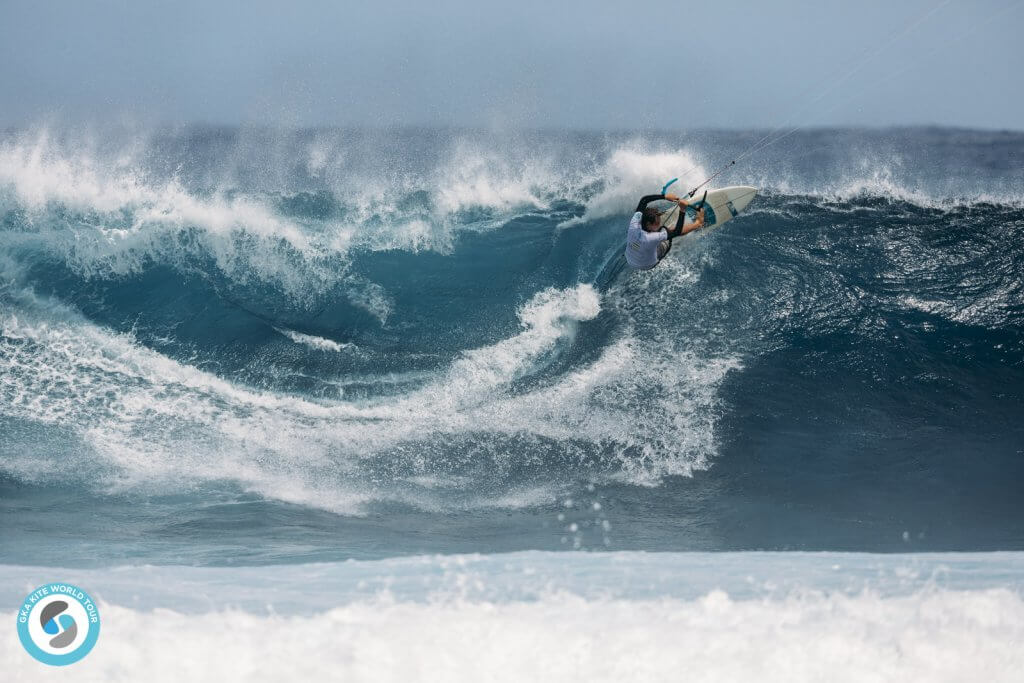 Elsewhere young guns Pedro Matos and Charlie Wise had a close backside / frontside battle. Brazilian Matos focussed more on trying to catch the bigger waves further upwind / deeper, obviously seeing an advantage with steady drawn out, smooth carves, while Charlie was very athletic on his front hand, working the smaller sections downwind, getting lots of turns on the inside. Matos took it by a whisker. 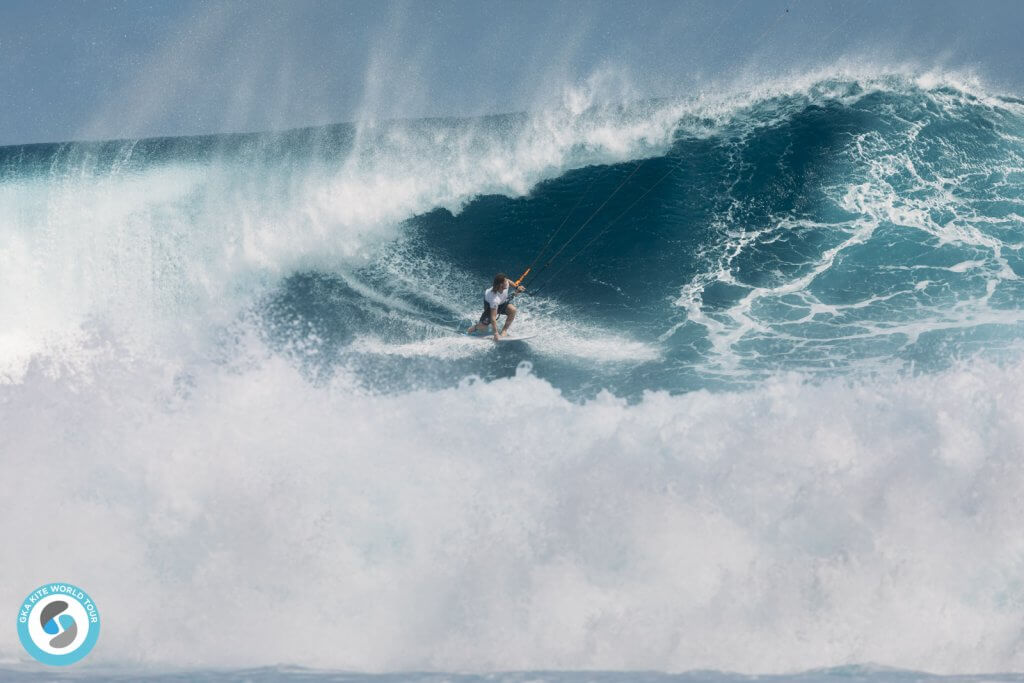 The highlight of the day came in heat 9A: a battle between Duotone team mates, both backsiders; James Carew and Sebastian Ribeiro. James’ wave count was not only high, but expertly selected – and he scored an outstanding 9.5 for a very deep barrel. Brave! Somehow Sebastian’s wave selection just never panned out, whether it was down to wrong position, poor luck, or James just being a wave magnet… 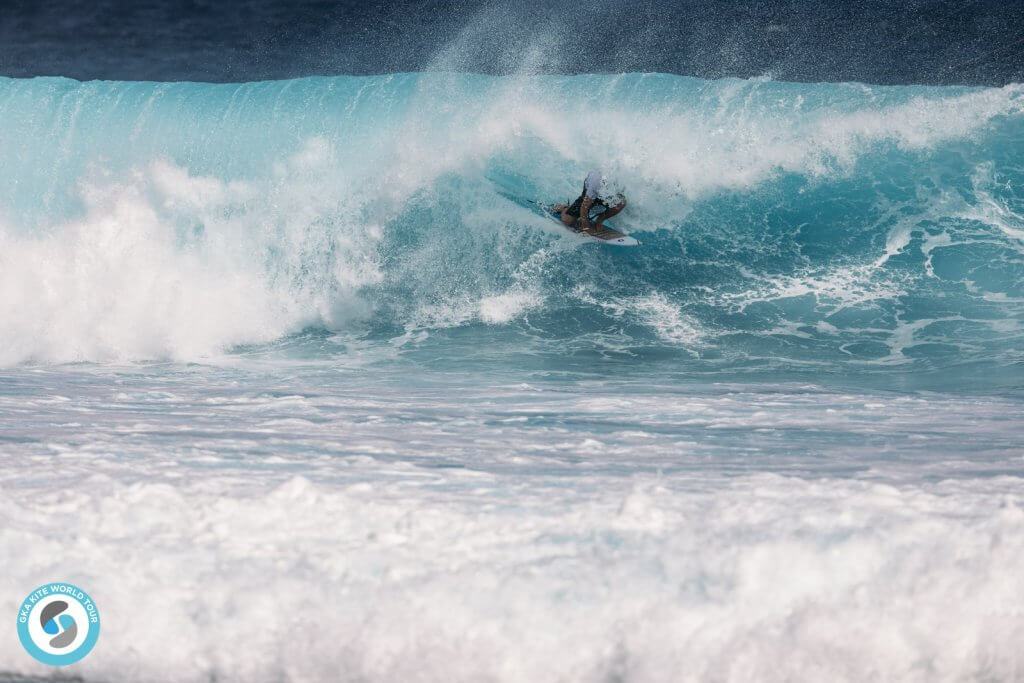 Oswald Smith (also reached the quarter finals in Freestyle yesterday) recovered in his heat against Reece Myerscough after putting his kite in the drink on his first wave and then taking ten minutes trying to relaunch it in the strong current. In the end James Carew was still hanging around the reef to watch the action and kited over to swap kites with Ozzy. With five minutes left in the heat Ozzy found advantage being frontside compared to Reece’s backside approach and seemed more comfortable in that stance on these waves, linking several turns on a few waves, managing to catch a biggish one too. 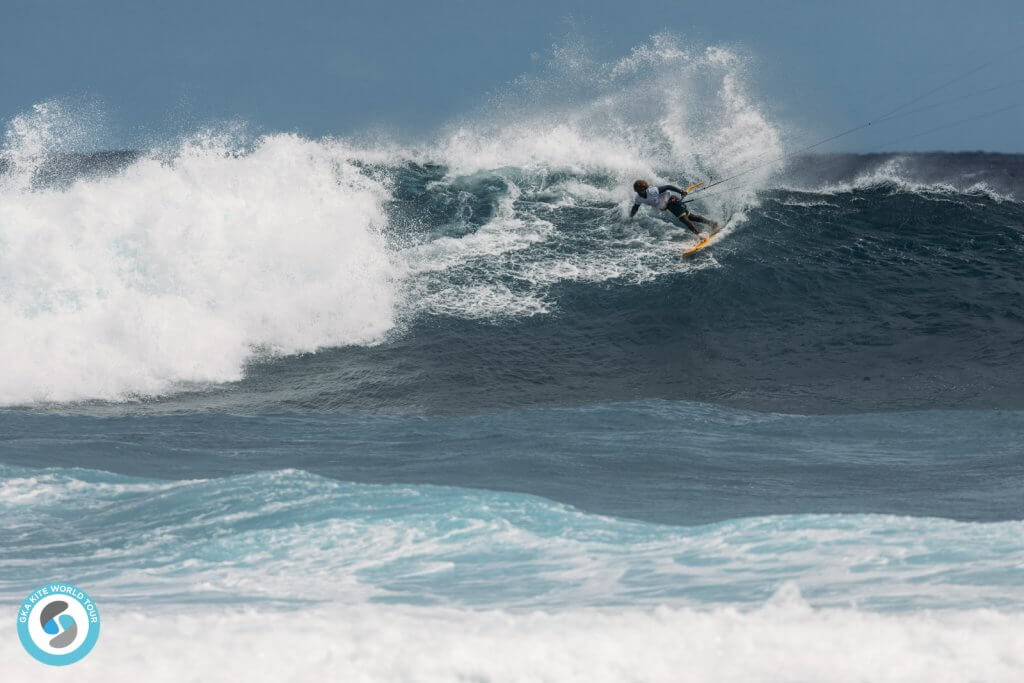 Mitu Monteiro knew when to change his game

Last heat of note, local shredder Willow-River Tonkin-Shakes versus the maestro Mitu Monteiro. Both locked into a full-on barrel hunt, catching great walls of water out back, knowing the reward for a barrel could be enough to win a heat with a single wave. They each had lots of attempts, but in the end realised the hunt wasn’t proving successful (but was nevertheless respectable!), so registered a late flurry of turns, with Mitu proving he had the upper hand.

Here is the highlights video from the day:

At 14 years old Capucine Delannoy is lighting up the women’s strapless freestyle scene and has just joined the North Kiteboarding International team.

Sporting events are now being rescheduled on a global scale

Round one of the men’s single elimination has kicked-off and we’re in for a treat.

Jalou and Airton fend off the threat

Wild conditions in Mauritius for Day 6

The thermals return to Valdevaqueros and Carla returns to the podium