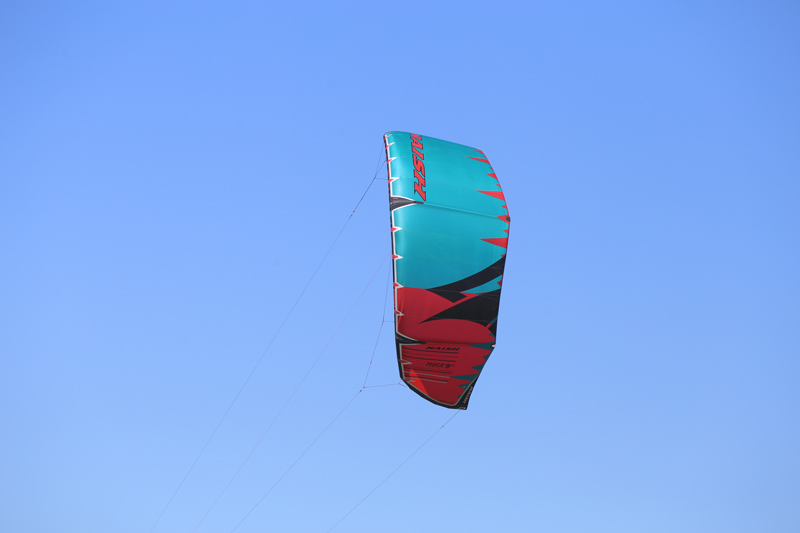 We review the kite that’s won the KOTA crown twice!

(Kevin Langeree might have had something to do with it too..) So, we come to the kite that Kevin Langeree has won the King of the Air on twice! Will it give the rest of us super powers?

Well, we’ve tested the Pivot in every type of nine metre (and way beyond) condition we could find – and that’s very relevant because it has a sweet spot. The first thing to say though is that in contradiction to its name, the Pivot isn’t purely pivotal (not compared to the new Triad, anyway). Having a soft feeling to the steering, the Pivot doesn’t feel as direct as the other Naish kites in this issue, but it is reactive.

On some kites you feel all the tension in the steering line and get a good feel for where the kite’s going, however the power deliver on the Pivot is really nice and light on the arms, even though the kite holds and delivers considerable power. It’s always moving and always generating power, but the feeling that you have in your hands is quite soft.

In light and moderate riding conditions the Pivot is very easy to fly because it has this constant feeling of power and never feels like too much when you’re turning it. Never snatchy, the power delivery is really smooth and we enjoyed it on those light wind days because although it delivers relatively strong amounts of power, the Pivot is always well behaved and very happy to park and ride.

When super powered the kite doesn’t continue to fly forward as much, particularly in comparison to both the Dash and Triad this issue. There’s a lot of pull on tap and no doubt you can go really high on it, but to go anywhere near as high as Kevin Langeree goes on it you need good technique in strong wind. When you’re riding in the upper 20% of the Pivot’s range it pulls as much as it travels through the window and sits back powerfully. Therefore, when you get it right you get these incredible, high and floaty jumps and you should make sure that people two beaches downwind know that you’re about to take-off! Great jumping and brilliant hangtime, no doubt, but you need good edge control to get the kite to react correctly in strong winds. If you’ve watched the close-up footage of Kevin taking off at the King of the Air, he can hold an edge so strongly, then releases it just before the wave and then re-engages a super firm rail once again as he goes up the wave and powers off the top. That’s why he can go so high, because his edging strength and technique match the Pivot’s ability to hold firm in a really powerful area of the window.

For the rest of us mere mortals, that same quality pays greater dividends in more ‘normal’ conditions. The Pivot delivers power in a very intuitive and manageable way across its low to upper range. There’s always a decent amount of power to manage, but that can be a good thing for many riders because you don’t need to move the kite very much and can just concentrate on your riding. For bigger riders this is a particular advantage.

The Pivot’s loops are also fairly legit for a bridled kite and the Pivot is a special standout, especially in lower to standard nine metre conditions of around 16 – 24 knots. The Dash and Triad are faster and more athletic (as are the Bandit and Dice; also in this ‘all round’ category), but the Pivot is aerodynamically tuned to create good lift and then loop well in lighter conditions without stalling, adding confidence to your riding. Plus, for good riders, or anyone wanting to get into looping, there’s a good amount of power, so you don’t feel let down by a weak loop.

Giving a decent amount of pull the Pivot is meaty enough to satisfy a lot of riders, though doesn’t scrape its way around the bottom half of the loop like a C kite. Although the loop is consistent in stronger winds, there’s a more acute sensation of control at the bar as the kite loops with other more athletic kites in this category, like the Dash, Triad, Dice and Bandit (though apart from the Dash, they all spin faster then the Pivot – but have more feel at the bar throughout).

Also as the Pivot doesn’t constantly search forward in the window it leans more towards twin-tip riding than surfboard riding, but it will cross-over, especially in lighter winds where the light steering input and good power generation will help. The Pivot is also very happy and comfortable parked, so if you get some down-the-line conditions you’ll be able to set and forget the kite nicely.

That famously generous Naish depower range isn’t quite as extensive on the Pivot as the Triad for example at its top end; it’s always holding on to something, but that’s why good riders can look really smooth on this kite. The incremental power management up and down the throw is always consistent, but even when sheeted right out, there’s still quite a lot of power to deal with when you’re riding the Pivot at its top end, and that’s quite a technical skill for inexperienced riders.

Naish Torque Bar with the above the bar trim system

Naish Torque Bar with the below the bar trim system

Once again on the Naish bars the centre line rope is uncovered. Although some riders may not like the rope rub if they ride with their fingers butted up close to the centre line, there is however no smoother, frictionless sheeting feel than naked rope running through the central ceramic block in the bar, whatever angle your kite is at in relation to your body. It’s also so much easier to wrap up your bar than having a thick plastic tube over your centre line! As we mention in the other Naish reviews this issue, the unique Octopus inflation system pumps up through one central valve. Another highlight for us is that the new below-the-bar control system includes a swivel above the chicken-loop as part of the trimming system, so you can now untwist your lines just as you would on an above-the-bar set-up. The trimming is also super smooth below-the-bar; overall a step-forward in this sort of design.

The Pivot is a beast; well measured, well made and with unshakable hold whatever the wind. In lighter wind the Pivot really rewards all riders with above average doses of lift for even the most basic technique. Driving powerfully, the soft steering feel won’t fatigue the inexperienced and yet will thrill experienced boosters as the wind builds and builds, when the Pivot becomes a machine best suited to stronger, more powerful riders. Kevin wins the King of the Air on this kite because the Pivot is capable of so much in lighter winds, but also just keeps on giving and giving in a battle of wills as the wind increases, resulting in the perfect match-up between rider and kite in that particular discipline.

Smaller riders will quite quickly find that the Pivot becomes a bit beefy on the legs when the wind picks up.

The Good, the Bad and the Ugly by Stig Hoefnagel

Imagine if Stig Hoefnagel had real problems! Thankfully it seems the unpredictable nature of kiting in Holland is his main concern. The Stoke Farm with an amazing job on the visuals here

AWSI brand and rider of the year awards received on day one, plus lots more