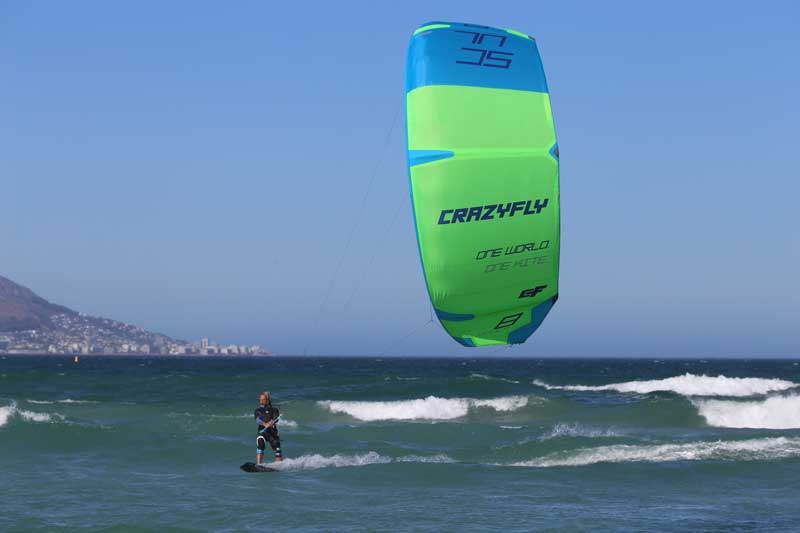 New CrazyFly products make you feel as though it’s Christmas. Everything’s beautifully boxed, presented and well thought out for delivery. Colour coded throughout, from the bag, to the kite, the bar, the bar bag, the pump; they go to a lot of effort to provide the impression that you’ve spent your money on something decent.

Feature-wise, you’re fully loaded with a quality feel of great workmanship as CrazyFly have their own factory in Europe. The kite isn’t overly heavy but is constructed with details in the right places and the finish / glued / edge finish points are all very clean and detailed. The single-point inflation works with a popular Boston valve mid-size nozzle which unscrews for wide deflation. Being carbon, the Sick bar is extremely light. Covered in a smooth rubber grip, the feel is at the more grippy end of the spectrum. CrazyFly developed their own chicken-loop and release system a few seasons ago which is up there in terms of smooth operation and simple push-in rebuild after ejection. Just above the chicken-loop the line untwister is super easy to grip and swivel then up above the bar the trimming system is operated via a rope and cleat. As the trimming rope that runs through the cleat is quite thin, there’s a bit of sticking when new, causing you to use both hands to adjust it at times, but from experience this does clean up nicely through use.

For the last two seasons we’ve tried the nine metre Sculp and been impressed by its power. This eight continues that trend and is one of the most powerful eights we’ve ever tried. The bottom end performance is incredible. Not just in its get up and go, but throughout the performance spectrum – especially for jumping.

Okay, there are kites that deliver power to you in a smoother fashion, but they often also require a bit more technique to access all the jumping potential. The Sculp offers the nitrous injection button to everyone, and for that reason it should be very popular. The Sculp doesn’t make you work for performance, it delivers it early. Vitally, although there is a lot of power, the Sculp also remains nicely forward in the window, so upwind performance is excellent. We had the kite in some super strong winds. On land we were so powered, but once on the water, because the kite gets nicely forward in the window, it’s still easy to control your speed. Push on your back foot and the kite depowers nicely at the front of the window. It’s a very good design for pure freeriding fun.

The easy access to power is ideal for bigger riders. If you’re a lighter rider you’re going to need to switch down to a smaller kite sooner, but you’ll get all the benefits of a faster, more nimble kite and then also, crucially, in terms of freeriding, you won’t lose the floaty hangtime benefits of a bigger kite. The jumping arc on the Sculp is great, with a constant flight path each time and the connection and power that you have on the way down matches the initial upward boost. The result is that piloting down for landing is easy as the Sculp does a lot of the work for you. When everything goes quiet after take-off, the kite stays with you consistently through the whole jump. Be aware that you’ll feel like you’re going bigger than ever, but don’t panic because the Sculp will help feather your flight back down.

Although the Sculp doesn’t handle strong winds as smoothly as some others, within its natural range (which is lower than most) there’s a huge amount of performance for inexperienced riders and far beyond. Transitions and tricks that require useful and easy lift from the kite are brilliant fun and made easy. Equally, when you’re using it within range, the Sculp can be thrown around nicely and intuitively for carving as you can ride a smaller size. However, because the Sculp does deliver a lot of power in its sweet spot, it’s a bit gnarly for high performance wave riding. If you’re into jumping and only just getting into waves, because you can ride a small kite, the Sculp is capable of all that you’ll want to do in your first year in the waves, though. If you’re a robust rider and excited about jumping then you’re going to love this. For those riders who don’t get as much time on the water as they’d like and want to get the most out of their sessions, the Sculp is a dream. In high wind it’s a handful and there is a bit of paddling at the bar as the power passes through the canopy, but that’s because the low end boosting performance is so good. In range the Sculp is a very capable all round freeride performer, with nice, intuitive handling and it continues to be one of our favourite easy-to-use twin-tip freeride and floaty boosting kites. Great bang for your buck, it makes you look good straight away and is a slick product throughout.

One of the better light wind jumping kites on the market, the Sculp has instant jumping reward, regardless of how refined your skills are.

We’d ask for a bit more refinement at the top end.

Turning circle: 6 – a bit more towards wide than pivotal

Ease-of-use: 8 (It’s very easy, but some people might not be comfortable with the power in such a small kite).

These three unique kites as featured in our early year issues really stood out to the team. Find out why!

One of Duotone’s original legacy kite models, the all new SLS edition is lighter and more responsive than ever before