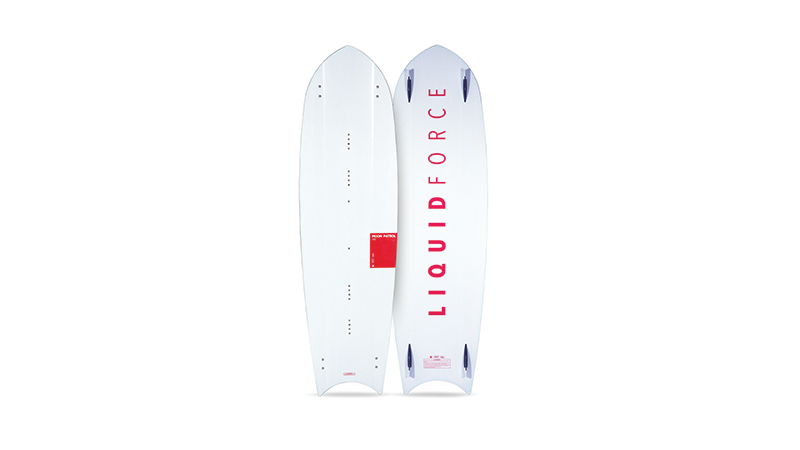 This review first appeared in Issue#85 in January 2017 … were the types of frothy comments I was greeted with at the Liquid Force Cape Town hostel when I turned up for the group downwinder with the accommodation residents, staff and the visiting international brand team and designers. Stoke levels were already rising nicely.

It was my first week in Cape Town and I was to be riding high all right. The Moon Patrol was causing so much fuss, not only because it’s new to the line-up this year, but it does look like a rocket ship! It’s like the Atlantis space shuttle that I saw on display at the Kennedy Space Centre in Cape Canaveral in Florida last year, where the speaker delivers an emotional story before revealing the actual space craft behind a huge screen. I choked up. Man’s brilliance at reaching the moon is something else. The Moon Patrol is just a board, but I was buying right into it.

Elegantly shaped, I like the asymmetric design. The asymmetric design starts with a fuller shape in the nose that rakes back with robust and considerably thicker girth in the rails for a twin-tip construction that blends down towards what resemble twin rocket thrusters in the tail. The stance is a little different to a twin-tip because there’s very little in front of your foot when you’re riding it with reverse thrusters engaged (read ‘tail first’), but LF have added an extra insert option to give you maximum flexibility.

I’m goofy footed and with wind from the left in Cape Town I was riding the Moon Patrol backwards away from the beach. It’s not too challenging, but there is a slight difference between riding the board forwards and backwards, though it’s just a case of a couple of runs before you get used to the extra pressure you need on your back foot when riding the board tail first and the imbalance isn’t enough to make the ride fatiguing at all. If you’ve never ridden a surfboard, then you’ll be attracted by the fact that there’s no need to learn to gybe with the Moon Patrol – you just set your straps up for your riding orientation so that your strongest stance is set with the board pointing forward.

One immediate benefit that I found with the short board length when riding the board in reverse is how easy it is to grab the tail! Pop off a wave when riding the board tail first and it’s very easy to find the grab (just like Dioneia’s tutorial in Motor Drive this issue on page 122!) and give it a good tweak. And that’s what this board really promotes – that slashy, varied snowboard style of riding taken into windy waves that allows for pops and grabs, switching 180 and then smashing the face of the oncoming wave. You can really mix your riding up in and around waves.

In terms of Cape Town riding it’s an ideal whip for the afternoons when the wind cranks up hard and really negatively affects the quality of the wave faces. Take this on a downwinder and it will allow you to make the best of the conditions, and that’s what we enjoy so much about some of the more niche products out there. If you’re into the idea of building a quiver, you need to be open minded to perfectly fill the gaps in your gear.

Liquid Force have added a big concave into the bottom of the Moon Patrol, and along with the thicker and more bevelled than average twin-tip rails there’s more grip for turning, too. Having more nose rocker at the front and a bit more buoyancy up front means that you feel more balanced when pushing the board through a carve than on most twin-tips. Of course some wakestyle boards with their channels and deep rockers are excellent wave face hackers, but unless you’re committed to the other side of their benefits, which is for monster pop and handling heavy landings, they can also feel a bit sluggish and heavy to get going for the average rider. The Moon Patrol doesn’t, and that’s where it differs. Honestly, it’s probably not going to be your one board quiver, unless you’re absolutely purely focused on hacking up wind swell, but it’s definitely a solid addition to your board rack. Although it’s bigger with more surface area than your twin-tip, if you’re coming from a surfboard it’s still a very different turn and doesn’t automatically drive round the carve. You rely more on your kite power, so there’s a technique change that’s more like a twin-tip carve, but the big advantages are that the board feels nice and light in the sky on the end of your legs, it’s easy to manoeuvre and tweak with less windage than a surfboard and the landings are soft and assured from lofty boosts. The Moon Patrol isn’t as stable as more focussed twin-tips if you’re regularly landing hard though.

If you’re looking to add a board to your quiver that’s more suited to slashing waves but won’t hold you back from boosting, then the Moon Patrol is perfect for your mission. Buoyancy and flow wise, it’s nowhere near as focused as a surfboard. Instead the Moon Patrol will suit a slashy rider looking to tear apart a spot that’s often blown out with wind swell. Having said that, we’d love to get this board in some decent flat water – you’d be laying out rooster tails from your carves for days! The board comes with six fins: 2 x 5cm and 4 x 4cm allowing you to tune the amount of grip you want.

The pure adaptability of this board in otherwise blown out conditions.

These three unique kites as featured in our early year issues really stood out to the team. Find out why!

A firm, direct and reliable ride with very few limits on freeride performance

A stone cold classic of the kiteboarding surfboard scene, the Naish Global Carbon is a premium wave riding performance board

We have tested the Naish Pivot every year since the first model in 2015, let’s see what the design team have changed to this legacy model kite this year